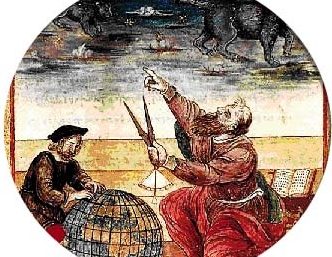 Tetrabiblos ‘four books’, also known in Greek as Apotelesmatiká “Effects”, and in Latin as Quadripartitum “Four Parts”, is a text on the philosophy and practice of astrology, written in the 2nd century AD by the Alexandrian scholar Claudius Ptolemy (c. AD 90–c. AD 168).

Ptolemy’s Almagest was an authoritative text on astronomy for more than a thousand years, and the Tetrabiblos, its companion volume, was equally influential in astrology, the study of the effects of astronomical cycles on earthly matters. But whilst the Almagest as an astronomical authority was superseded by acceptance of the heliocentric model of the Solar System, the Tetrabiblos remains an important theoretical work for astrology.

Besides outlining the techniques of astrological practice, Ptolemy’s philosophical defense of the subject as a natural, beneficial study helped secure theological tolerance towards astrology in Western Europe during the Medieval era. This allowed Ptolemaic teachings on astrology to be included in universities during the Renaissance, which brought an associated impact upon medical studies and literary works.

The historical importance of the Tetrabiblos is seen by the many ancient, Medieval and Renaissance commentaries that have been published about it. It was copied, commented on, paraphrased, abridged, and translated into many languages. The latest critical Greek edition, by Wolfgang Hübner, was published by Teubner in 1998.

Fuller, Synergetics: Explorations in the Geometry of Thinking