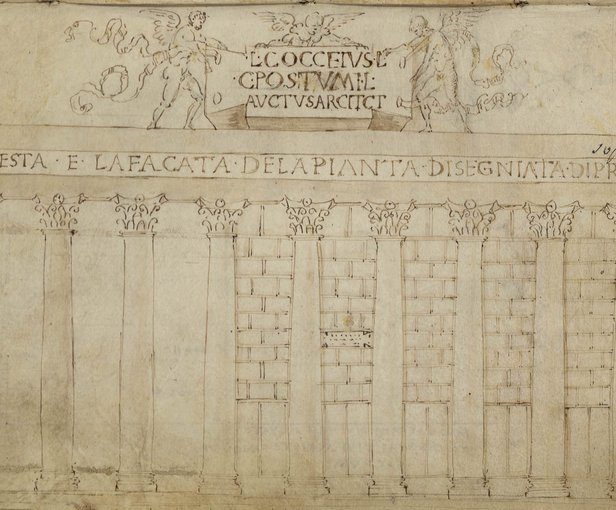 The so-called Sienese sketchbook of the famous architect and engineer Giuliano da Sangallo was originally in the library of Sienese scholar Giovanni Antonio Pecci. The small format and the style of the drawings indicate that the book was a personal study and work tool.  It also has studies of monuments observed in the course of Giuliano’s travels in Italy and France (among which are triumphal arches and the Coliseum), copies of reliefs, drawings of decorations (panoplies, grotesques, frames), and even some sketches of capital letters from public inscriptions. Giuliano appears to have had a significant interest in medieval architecture, as attested, for instance, by the sketches of a number of buildings in Pisa and of the Tower of the Asinelli in Bologna. The nature of these sketches is as yet unresolved: some scholars see them as drawings for the renovation of the existing building; others think they were the designs for a new building. A drawing in Pecci’s hand of a cross-section of the Sapienza building, based on Giuliano’s original plans, is inserted in the codex. The sketchbook provides a window into Giuliano’s deep and multi-layered artistic culture, as well as bears witness to his intense study of classical models as an integral part of his work. The drawings probably date to the architect’s later years, from the 1490s to 1516.