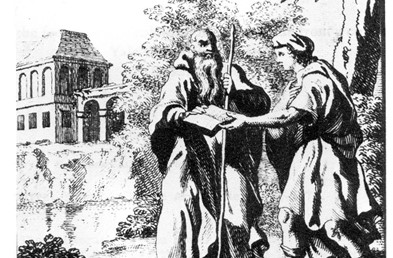 Voltaire, Zadig or the Book of Fate

Zadig; or, The Book of Fate (French: Zadig ou la Destinée; 1747) is a novella and work of philosophical fiction by the Enlightenment writer Voltaire. It tells the story of Zadig, a philosopher in ancient Babylonia. The author does not attempt any historical accuracy, and some of the problems Zadig faces are thinly disguised references to social and political problems of Voltaire’s own day.

It was originally published as Memnon in Amsterdam (with a false imprint of London given) and first issued under its more familiar title in 1748.

The book makes use of the Persian tale The Three Princes of Serendip. It is philosophical in nature, and presents human life as in the hands of a destiny beyond human control. Voltaire challenges religious and metaphysical orthodoxy with his presentation of the moral revolution taking place in Zadig himself. Zadig is one of Voltaire’s most celebrated works after Candide. Many literary critics have praised Voltaire’s use of contradiction and juxtaposition.