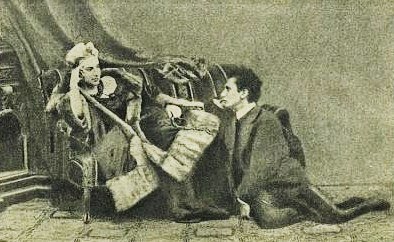 In his stunning essay, Coldness and Cruelty, Gilles Deleuze provides a rigorous and informed philosophical examination of the work of the late 19th-century German novelist Leopold von Sacher-Masoch. Deleuze’s essay, certainly the most profound study yet produced on the relations between sadism and masochism, seeks to develop and explain Masoch’s “peculiar way of ‘desexualizing’ love while at the same time sexualizing the entire history of humanity.” He shows that masochism is something far more subtle and complex than the enjoyment of pain, that masochism has nothing to do with sadism; their worlds do not communicate, just as the genius of those who created them – Masoch and Sade – lie stylistically, philosophically, and politically poles a part. Venus in Furs, the most famous of all of Masoch’s novels was written in 1870 and belongs to an unfinished cycle of works that Masoch entitled The Heritage of Cain. The cycle was to treat a series of themes including love, war, and death. The present work is about love. Although the entire constellation of symbols that has come to characterize the masochistic syndrome can be found here – fetishes, whips, disguises, fur-clad women, contracts, humiliations, punishment, and always the volatile presence of a terrible coldness – these do not eclipse the singular power of Masoch’s eroticism.

Gatens, Feminism and Philosophy: Perspectives on Difference and Equality