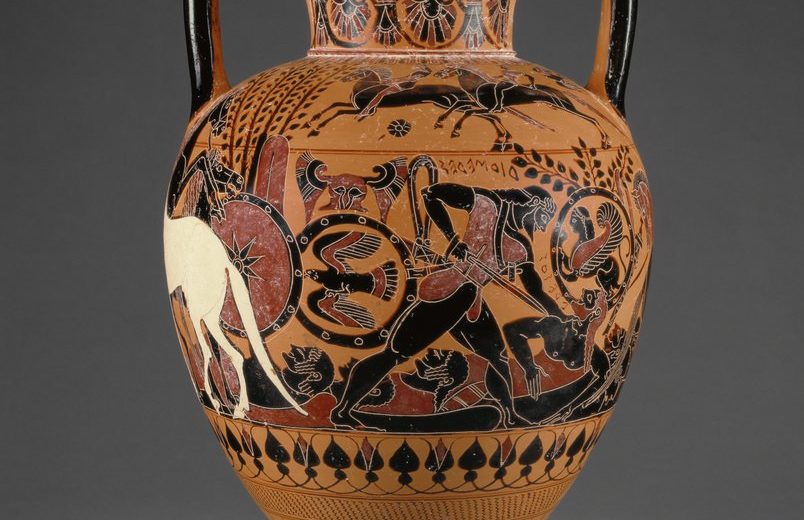 Transmitted among the plays of Euripides, but disputed to have been written by him ever since Antiquity, Rhesus is probably a mid-fourth century tragedy that takes place some fifty days before the ending of the Trojan War, on the night when Diomedes and Odysseus sneak into the Trojan camp. It begins at night, with a few Trojan Watchmen (the Chorus) waking up Hector to inform him that there is some activity in the Greek camp and that they might be fleeing. Hector’s determination to use this to Troy’s benefit and attack straightaway is placated by Aeneas’ suggestion to send a spy beforehand; Dolon accepts the mission on the condition that he is given Achilles’ horses as spoil of battle at the end of the war.

As Dolon leaves (disguised as a wolf), a shepherd arrives at the Trojan camp and announces the arrival of the Thracian king Rhesus with his powerful army. Even though Rhesus has come to help the Trojans, Hector doesn’t welcome him gently, admonishing him for appearing so late in the war. Rhesus gives an explanation for his belatedness—Scythian invasions of his home country—which Hector accepts; from thereon, the two move on to devising a plan of attack for the next morning which should prove to be fatal for the Greeks. Soon after Hector sends Rhesus and his men to a camping-place, Odysseus and Diomedes appear, having captured Dolon and unwavering in their determination to kill the Trojan leaders while they sleep. The goddess Athena appears and suggests the two to slay Rhesus first and take his horses as war spoils. The plan is threatened to go awry when Paris appears, but the Trojan prince is deceived by Athena who takes the guise of Aphrodite, the guardian-goddess of Paris. Soon after, a wounded Thracian charioteer announces the death of Rhesus and blames the theft of his horses on Hector. Hector, however, is pretty sure that this must be the work of Odysseus—something which the mother of Rhesus (a Muse) confirms after suddenly appearing with the body of her son. In addition to Odysseus, she also blames Athena for Rhesus’ death, and threatens to never again visit the city of Athens or bring to it any other learned men.